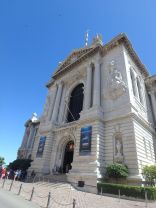 An aquarium located in the basement of the museum showcases a wide array of flora and fauna. Four thousand species of fish and over 200 families of invertebrates can be seen. The aquarium also features a presentation of Mediterranean and tropical marine ecosystems.

After having undertaken from the age of 22 (in 1870) many years of passionate oceanographic research and expeditions around the world, Prince Albert I (1848-1922, nicknamed the “learned prince navigator”) envisages for the first time in 1885, to create a marine biology laboratory in his Principality, a few months after discovering the results of his expeditions led by zoologist Alphonse Milne-Edwards. The idea matured in particular after the important success of the presentation of his scientific collections at the Universal Exhibition of Paris of 1889, with the idea of highlighting the collections that he gathered during his scientific campaigns, and disseminate new knowledge about the sea and the richness of its biodiversity. The plans for the imposing monumental and spectacular neo-baroque style palace-museum, dedicated to the Mediterranean Sea and oceanography, were drawn up at the end of the 19th century by the French architect Paul Delefortrie. The construction of the building, the first stone of which was laid on April 25, 1899, poses many technical problems to be solved over the course of twenty years (including 11 years of construction) before its inauguration and opening to the public, due to its rise on a steep rock face, facing the Mediterranean, from sea level to over 85 m high, and its respect for the integrity of the surrounding Saint-Martin gardens. The 100 m long building is mainly constructed with white stones from La Turbie and Italian limestone from Brescia for elements of particular interest such as the columns of the facade and the interior or of the monumental staircase. The Oceanographic Museum was inaugurated in 29th March 1910. Jacques-Yves Cousteau was director from 1957 to 1988. The Museum celebrated its centenary in March 2010, after extensive renovations.
Map 2012
After entering the Aquarium we go on the 3rd floor to see turtle and get a little snack. On the 2nd floor we have the Albert 1st hall showing the research the museum has done during the time. Beeing one of the leading research institutes at the Mediterranean sea. Opposite we find the whale room, where research about whales is shown. The we go down to the basement. The first aquarium we meet is a large coral reef tank. Then its time to look at species of the Mediterranean sea, home to octopus, morray eal and sea turtles. From there we enter the tropical oceans home to clown fish and many more. From here there is exit to a small garden with tortoises.